Soooo!!! Resurection again on this blog. Again another painting campaign. This time its the ABZ Games tale of many gamers.

Now i dont have a lot of time to paint so ive decided on.... Adeptus Custodes!!!

Cause i hate myself ive decided to do it with Non Metallic Metal. Expect more pics and battle reports over the coming months. 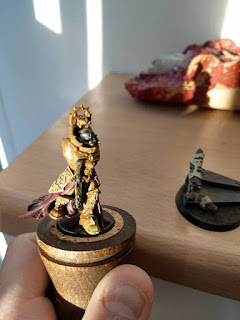 This week in gaming!

Soooo, not much gaming to be had this week. Played a game of imperial assault, we tried the rules from the Hoth expansion. Hmmm, just cause there are multiplayer rules doesnt mean you should use them. with 2 horde lists even the multiplayer map was a bit hoaching. I think a couple of smaller games might have been a better idea, we had enough tiles and space to have multiples running.

I was going to play more AvP on saturday, sadly im an Ejit and forget the models. Doh!! However did get all my extra stuff built. I've used the points in the book to make a 300pt list for each faction. I feel that will be more balanced than the starting forces. Need to shift a couple of commissions off the painting desk then i can get the ABZ Games AvP demo models finished.

As usual.... some pics.... Also a little sneak peek of something super secret..... In the pics is also warhammer being played on ABZ Games' new micro art matt. Very nice for gaming on apparently.

Working on a bit of Malifaux terrain.

Something special this way comes.....

A Dengar ate my baby!

Well what a hobby filled week i've had. Not many pictures sadly.

Wednesday, played AvP. Getting to grips with the game as we will be starting to demo this in the shop, at conventions and war games shows. Its a fun game, were going to tweak how we perfeorm the demos. Thinking about using some sort of "survival mode" competition for people who take part. How many aliens can you gib until you are eaten, kind of a thing. So gonna have to get the ABZ Games studio monkeys to start painting the models.

On friday and saturday played a lot more Imperial Assault. Another game were going to be demoing at shows. Im slowly working through the models to get painted and ready. This is a game im getting VERY into, even the snotlings are playing it now. However they both want to be the evil empire. :(

My opponents for some of the weeks games. Gabriel and i started our campaign for Imperial Assault. I have been "ordered" to finish painting them as quickly as I can.

Do you dig (frost)Graves, yeah they're alright!

I had my Japanese samurai inspired summoner crew facing my good friends..... balls.... i cant remember what he had. (found out enchanter) I remember my daemon ate A LOT of them.

So my warband:
Tamakeri - summoner wizard
Kagema - apprentice
Yoshimoto - Templar
Hironaka - Templar
Fujita - Infantryman
Jim - Archer
Then of course there was also.... The Fuck Daemon!! More on him later.

We played the well scenario. Fun little thing where you had to drink from the well, if you fell in your dudes were straight to dead.

I wish i'd taken more notes from the game to do a proper battle report. Next game i will. However the bits i do remember. First turn, i managed to summon the F-Daemon. He proceeded to wander around for the whole game eating thugs. He was a bit good and my man of the match. 2 crits were rolled with him, he was a hungry wee daemon. We both managed to drink from the well, however i think both wizards were clinging to life with 1 health by the end of the game. Not cause we had fought just REALLY bad spell casting rolls. Jinx scampered off with 4 treasure to my 3. So not a bad first game. Tamakeri managed to set up shop in a Laboratory with attached summoning circle, as you do. So that will come in handy next game.

As for the minis, they only arrived 2 hours before we played but are now base coated and ready for painting tonight. Im avoiding red as that is usually my go to colour. Im tempted by blue or a jade green. Thoughts? 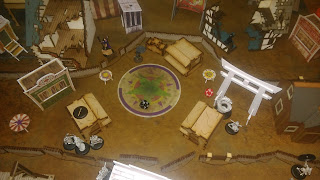 The adventures into flames of war continued on Wednesday as the might of the Soviets crushed the fascists under treads of communisim. Enjoying painting the tanks, but they are probably eBay bound when finished cause I found Canadians! 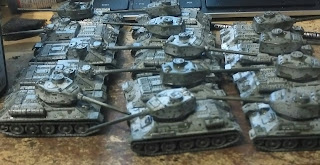 Really like how the white wash worked on these. 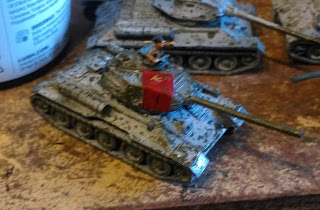 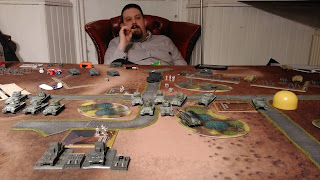 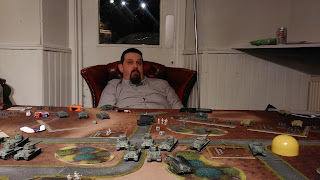 He's not a happy bunny that his stugs went pop.

Wow, as i look through the pictures in my blog I really have improved over the last 2 years.... 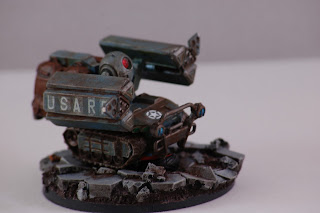 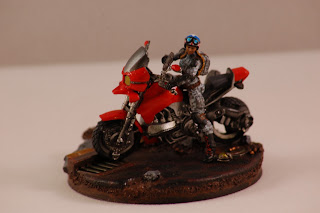 You seek for knowledge and wisdom, as I once did; and I ardently hope that the gratification of your wishes may not be a serpent to sting you, as mine has been.
Posted by Kit at 14:12 No comments:

Kit's Painting Blog and other Ramblings 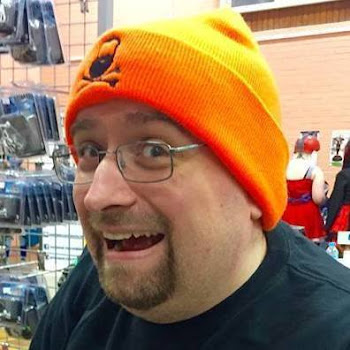